If ball touches any equipment on ground which is worn by the player of the Fielding team five runs are awarded to the batting team . It is not just Helmet.( Dhoni gloves cost 5 runs for India in champions trophy 2017) 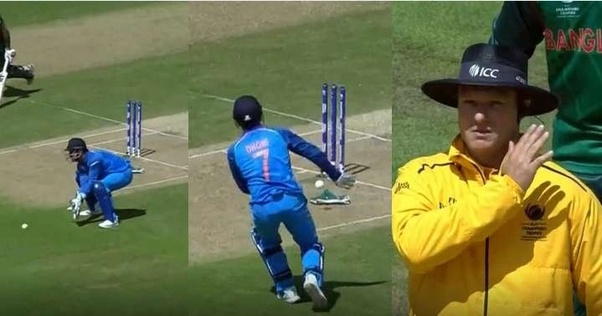 After Batsman has been declared out , the captain of the Fielding team can withdraw the appeal but only with the consent of the umpire( Dhoni calling Ian bell after the run-out)

Cricket can be played without bails

The most recent incident was on June 9, 2017 when Afghanistan played against West Indies and heavy winds made it impossible for the bails to be placed on the stumps.

Hence, the captains, along with the umpires, decided to do without them.

Forfeiting innings of a Test match

You can forfeit an entire innings of a Test.

One famous incident, that occurred in the past, was between England and South Africa in 2000.

Rain played spoilsport and SA captain Hansie Cronje made an offer to England captain Nasser Hussain to chase down 249 in 76 overs.

No appeal no wicket :

The role of the on-field umpires in cricket games has been lesson recently with the introduction of modern technologies. The recent development ofDecision Reviewing System which has not yet got the approval of all test playing nations, has further limited the role of on-field umpires. However, to get a batsman dismissed through any method a bowler needs to appeal to the umpire for the wicket. Though keeping the spirit of cricket alive and making sure that cricket still is a gentlemen’s game, there have been some rare incidents of batsman walking off the pitch after getting nicked without any appeal from the bowler but that is something very rare now a day. In order to get a batsman out whether by lbw or caught behind the stumps, the ICC cricket rules clearly state that the fielding team has to appeal so the umpire can make his decision. It is to be noticed that the bowler or any player from the fielding side can make an appeal any time before the bowler has turned back for the next delivery.