Best ODI game ever in cricket

It was one of the thrilling match in the history of cricket.

Australia and South Africa had finished with same points in super six league .Australia were ahead by a Mere Net Run Rate of 0.184 .

South Africa won the toss and elected to Field first.

Shaun pollock dismissed the dangerous Mark Waugh for a duck . Kallis and Donald further joined and put Australia in 68/4 after 14 overs. With Donald picking Ponting and Lehmann in a single over.Aussies had lost Ghilcrist too .

Waugh and Bevan put a partnership of 90 runs. After 22 overs . Australia at 158/4 in 39 overs.A post challenging score is expected

Shaun pollock came to bowl his 8 th bowler removed Steve Waugh and Next Batsman Tom Moody in a single over .Bevan and Shane Warne put 40 runs partnership With Donald and pollock strikes at the end . Australia bowled out for 213 in 49.2 overs.

Chasing a seeming easy total . South Africa had a good start 48/0 in 12 overs with Gibbs and Kirsten surviving opening spell of McGrath and riefell.

Shane Warne in his second over sent Gibbs back to the pavilion and after 2 overs Warne bowled out Gary Kirsten.

After a flurry of wickets . Kallis and Jhonty Rhodes done the repair done and put a 84 runs partnership. At 145/5,South Africa needed 69 off 57 balls,it was anyone's game

Kallis and pollock's 30 run partnership pulled closer but duo got out in next over and South Africa lost Boucher and Elworthy in quick succession.

49.1 Klusener cleared his front leg and smashed a four on the off side 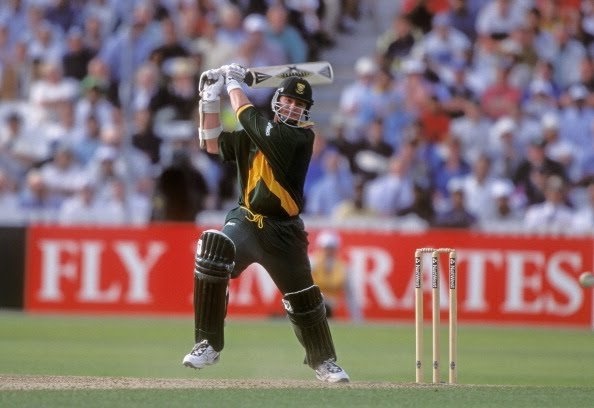 Klusener hit the all ,but it couldn't time properly as it went only far mid off bisecting bowler and non striker Donald looked at the ball and not at the striker And klusener came for a run and Donald failed to run. Match tied and Australia into the finals on the base of run-rate.